For more information regarding any of our tours, feel free to give us a call at 415-857-5685
Home › Alcatraz Tour Packages › Alcatraz and San Francisco City Tour
Sale! 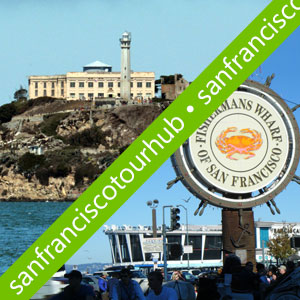 Due to overlapping tour times, you MUST choose separate days for each tour, unless the available Alcatraz Tour time is at 2:40PM or later.

Why do we still have available Alcatraz tickets?

Enjoy the most popular combo tour in San Francisco! We will pick you up in our Luxury Coach and start your journey at at Fisherman’s Wharf, where you’ll learn about the beginnings of Pier 39 and where those sea lions came from.

Get a sense of the history of the Italian fishermen as you ride past the Fisherman’s Chapel, honoring those who have died at sea. The Balclutha, a 19th century cargo vessel now docked at Hyde Street Pier, was the only way to cross the bay before the Golden Gate Bridge was built. See North Beach – where Joe DiMaggio was raised and where the famous Steve McQueen chase scene in Bullitt was filmed. Learn where to eat and where to stay. Venture through Chinatown and see how the largest Chinese population outside of China lives and shops every day.

Then it’s off to Union Square, the shopping district of San Francisco. And the Civic Center arena where Pretty Woman was filmed, the United Nations was chartered and the treaty ending the war against Japan (WWII) was signed. Off to Twin Peaks where you will be 910 feet above the city, witnessing it’s breathtaking views. Don’t worry! Our driver will be happy to take photos of you and your family so no one is left out.

Learn about the Beat Generation and how hippies evolved. See where the 60′s really happened – in the Haight Ashbury area all while you hear a musical soundtrack from that generation. Take a ride through Golden Gate Park and on to Inspiration Point in the Presidio. Learn the reason that Otis Redding whistles in “Sittin on the Dock of the Bay” which Otis actually wrote while overlooking San Francisco bay. Next we venture to South Vista Point at the start of the Golden Gate Bridge for views that will make your friends jealous!

Now, to top off your San Francisco City adventure, enjoy an amazing historical tour by taking the Alcatraz ferry to the most infamous prison in the United States… Alcatraz! Experience the incredible stories first hand within the jail walls by listening to the audio guided tour of Alcatraz prison narrated by its ex-prisoners!

Once home to some of America’s most notorious criminals, the federal penitentiary that operated here from 1934 to 1963 brought a dark mystique to the Rock. The presence of infamous inmates like Al “Scarface” Capone, and the “Birdman” Robert Stroud helped to establish the island’s notoriety. To this day, Alcatraz is best known as one of the world’s most legendary prisons.

You will experience the beauty and history of San Francisco and the infamy of Alcatraz. Valued at $39.90 for adults, or Children $23.90; you’ll be astounded what you will see and learn at Alcatraz and the City Tour. 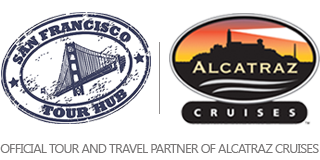 • The Official Alcatraz ferry ride to and from the prison from Pier 33.
• “The Alcatraz Cellhouse Tour,” An audio guided presentation within the actual prison walls of Alcatraz.
The audio guided tour features actual correctional officers and prisoners who lived and worked at Alcatraz.

And of course, You may stay as long as you please at Alcatraz as the ferries come around every half hour to pick people up and return them to shore.

View such valuable treasures as:

The experienced tour guides will provide panoramic photo opportunities at such highlights as:

Complimentary shuttle pick up is available for most downtown San Francisco hotels only.