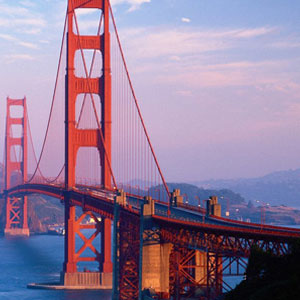 Ride along in our comfortable air-conditioned Plush Mini Coach for a unique San Francisco adventure of the City. Narrated in person by long time locals, you will get the inside on all there is around town. A fun, laid-back experience suitable for the whole family!

Get a sense of the history of the Italian fishermen as you ride past the Fisherman’s Chapel, honoring those who have died at sea. The Balclutha, a 19th century cargo vessel now docked at Hyde Street Pier, was the only way to cross the bay before the Golden Gate Bridge was built. See North Beach – where Joe DiMaggio was raised and where the famous Steve McQueen chase scene in Bullitt was filmed. Learn where to eat and where to stay. Venture through Chinatown and see how the largest Chinese population outside of China lives and shops every day.

Then it’s off to Union Square, the shopping district of San Francisco. And the Civic Center arena where Pretty Woman was filmed, the United Nations was chartered and the treaty ending the war against Japan (WWII) was signed. Off to Twin Peaks where you will be 910 feet above the city, witnessing it’s breathtaking views. Don’t worry! Our driver will be happy to take photos of you and your family so no one is left out.

Learn about the Beat Generation and how hippies evolved. See where the 60′s really happened – in the Haight Ashbury area all while you hear a musical soundtrack from that generation. Take a ride through Golden Gate Park and on to Inspiration Point in the Presidio. Learn the reason that Otis Redding whistles in “Sittin on the Dock of the Bay” which Otis actually wrote while overlooking San Francisco bay. Next we venture to Fort Point below the Golden Gate Bridge for views your friends will be jealous of, crossing the bridge on our way to Fort Baker. Get a view of the bridge seen only by locals and then head back across the bridge knowing you’ve seen everything there is to see!

Complimentary shuttle pick up is available for most downtown San Francisco hotels only.